New Port Richey is a pulsating residential community with a strong local government and an attractive historical downtown and Main Street. The city is alive with redevelopment and growth of it's real estate into a broad array of business and retail services. Since its incorporation in the year 1924, the city is most recognized for its cultural heritage and unique riverfront landscape.

New Port Richey attracts new residents and visitors at an increasing rate each year based on several factors. New Port Richey's geography blends nature, beaches and great shopping with restaurants, culture and business - all with a small-town feel. New Port Richey is rich in history and a town alive with happenings. [www.newportrichey.org]

The downtown area of the city was surveyed and platted in 1911 and grew mainly through the efforts of the Port Richey Land Company, which owned and developed much of the land in New Port Richey. It was during the 1920's that New Port Richey entertained the Hollywood crowd, attracting film stars Thomas Meighan, Gloria Swanson and Ed Wynn, author Pearl Buck, among others. Representatives of Paramount Pictures came to New Port Richey to discuss the possibility of creating a motion picture studio in town. The Great Depression ended these plans. A 55-room Spanish-style luxury hotel called the Hacienda Hotel (located on Main Street), the Meighan Theatre (on Grand Boulevard), and Sims Park (on Bank Street & Circle Boulevard), are just a few of the historical attractions you'll find here. To learn more about New Port Richey homes for sale or available homes for rent, contact us today.

Centered between Tarpon Springs, south and Port Richey to the north, New Port Richey has a total area of 4.6 miles. The Gulf of Mexico coastline borders the west side and Veteran's Expressway is to the east. The Pithlachascotee River runs through the city. New Port Richey is considered part of the Tampa Bay area, a mecca filled with major attractions and hot spots for recreation, sports and culture.

WOW..AMAZING SUNSETS OVER THE POND ON THE 16TH HOLE IN TIMBER GREENS a 55+ COMMUNITY.....THIS 2 BEDROOM 2 bath Patio Home , is located at the end of the street on a cul-...

Under Construction. Riverwalk Preserve in New Port Richey is a new construction community fit for a serene and active lifestyle. With conservation views, walking trails a...

IN MILLPOND LAKES VILLAS A GATED COMMUNTIY....This home has a open park like setting, the last house on the street and all open community land. This 2 Bedroom possible 3 ... 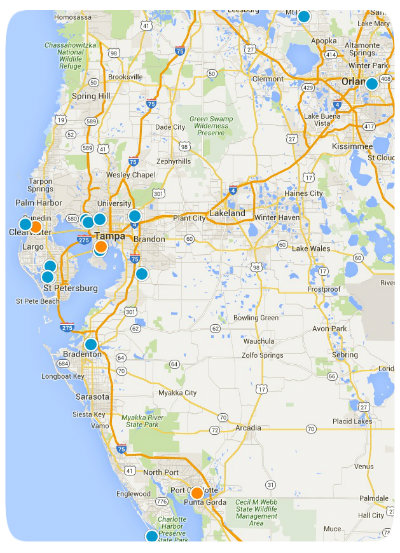